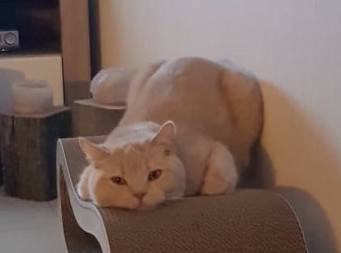 Case Study Elani and Katrin “Wow!!! It worked, he stopped peeing on my bed!”

Challenges when Katrin contacted me

Elani, a four-year-old tomcat, developed the undesirable behavior of peeing outside his litterbox. He is living with his human guardian Katrin and his cat friend Amari. Not only did he pee outside the litterbox; he peed on Katrin’s bed. A very unpleasant challenge that required to be solved as fast as possible. Katrin, an animal communicator herself, asked me to work with Elani energetically to solve this problem.

Solution over two months, in close collaboration with Katrin

Elani is an experienced cat when it comes to communicating telepathically with humans. He also knew that Katrin and I are members of the same group, that we both attended last year’s Twelfthtide program together with our cats. At this time, my soul cat Flix was still alive, and Elani also knew this. So, we had an easy start with our cat communication.

I sensed a susceptible, wise cat, an old soul that had already experienced a lot. It’s not his first incarnation on the planet. I also sensed that his stress and trauma came from his childhood. As a tiny kitten, he was brought to many fairs, and he felt moved around a lot in a cat carrier, not always as careful as necessary. Loud voices were surrounding him; people talked about him, but not to him. I saw him sitting in the corner of his cat carrier, full of fear and panic. His eyes were wide open and full of fear.

I decided to clear this trauma right away, without an auric clearing first. His childhood trauma was very present and required to be cleared right away. I also tuned into my symbol cards: protection, self-love, and serenity came up first.

Patience was apparently not Elani’s strength. He couldn’t wait for his follow-up session. When Katrin talked to him a few days later, he asked her, „where is she, the one from Flix?”

A few days later, when I connected with him, he was pretty impatient. He had experienced a lot, and he wanted to share that. He was thinking a lot, and he was afraid that his fear would come back. We worked again on his birth and childhood traumas. I could clear an even deeper level of these traumas for him.

This dental restoration was already scheduled for a while. I processed an Auric Clearing for Elani a few days before the appointment. I cleared all seven embodied chakras and all eight morphogenetic chakras from all entities, occupants, portals, and wormholes. Additionally, I also cleared fear, worries, and anxiety. He mastered the dental appointment very well and recovered quickly.

I sensed that he was in the middle of a substantial transformational process. I perceived him as being with two feet in his old life and two feet already in his new life. I also felt a lot of hidden emotions of shame and guilt, most probably not from this life. In this session, I cleared inherited karmic imprints and lack, limitation, shame, guilt, undeservedness, and unworthiness. Especially the strong perception of shame and guilt came rather unexpectedly and was a new aspect in my work with him.

I was sure that we were on the right track and made a big difference this day.

„His eyes are no longer sad. Beautiful, I can feel and see the huge impact of your work. Excellent,” said Katrin.

The process was working for him. I could feel his transformation. Then, we had peace for a while, but then he started to pee on the bed again.

During the follow-up session, I continued to clear inherited karmic imprints and another layer of lack, limitation, shame, and guilt. In addition, I also cleared karmic ties between Katrin, Elani, and Amari. Karma clearing is like peeling an onion, layer by layer.

Also, he mentioned that he would love to have a litterbox in the bedroom. Exactly what Katrin wanted to avoid. Well, she is an amazing cat mom, and she put a litterbox in her bedroom for him.

„Your work feels very positive. We are on such a good journey. And his transformation is enormous. This second session made a massive difference for him.“

Elani’s behavior and development made tremendous progress. However, we couldn’t declare victory yet, as he still peed on Katrin’s bed from time to time. As I prepared myself for this next session, the topic of self-love, the lack thereof to be precise, came up and retrieving lost soul facets.

Elani was very moved that Katrin added another litterbox to her bedroom, just for him. And he also understood that she removed it when he used her bed again as his litterbox. Elani, on the other hand, wanted to make everything right, but he was standing in his way.

I processed a soul-level focused trauma clearing for him. Then, I cleared emotional and mental traumas. Especially the emotional trauma clearing process reacted heavily. The cards of the day showed self-love at the top.

„He is evolving beautifully, but what is it we overlook?“ That’s how Katrin perfectly summed up the situation. Then, we discovered what we missed–it was Katrin’s own very stressful and challenging situation at work.

As soon as Katrin mentioned that she had to master a couple of challenges herself, I was immediately alerted. It turned out that she was facing severe career-related challenges. Before that, she experienced rather unpleasant months with lots of extreme mental challenges.

I suggested processing an Auric Clearing for Katrin, Elani, and also Amari. Said and done. The Auric Clearing was very effective as Katrin and her cats got on the same much higher energy frequency. Additionally, Elani sensed that his beloved human finally did something for herself, and Amari was also included. All three integrated the clearing very well. And the best of it is this–Elani stopped peeing on Katrin’s bed. Also, the additional litterbox didn’t need to stay in the bedroom. Katrin found a better solution.

Katrin said a few days later: „I feel great. I have much more clarity and stay at peace with myself rather than allowing anybody else to involve me in their unfinished business. We did the right things. I’m so happy about it!” That’s how Katrin summed up the success.

After almost two months, succeeded: Elani did no longer pee in Katrin’s bed. The litterbox could be removed from the bedroom, and Elani started to use the other toilets. „Wow, it worked!!!“

For Katrin, I could clear all auric blockages caused by a very challenging situation at work. This way, she could master the crisis much better. Elani was so happy that his beloved human finally did something for herself. Both cats, especially Elani, carried lots of „baggage“ of their human around that needed to be cleared.

For Elani, the situation was multi-faceted. On the one hand side, he was traumatized himself due to his unpleasant childhood. When the additional stress in Katrin’s life came on top of it, it was too much for him, and he started peeing on her bed. And all the three had a big problem.

I am very grateful that I could help Katrin, Elani, and also Amari. They are a fantastic team, and both cats have an absolute dream forever home. „I just want to thank you for everything,” Katrin summed up our beautiful collaboration.

This case study shows a couple of things: One that not only pets from a shelter can be traumatized. Two that in the case of peeing on the bed, it is almost all the time a symptom of extreme stress and trauma. And more often than not, their human guardians are part of the problem and also part of the solution. Leveraging highly effective energy clearing techniques for animals and human together, those problems can be effectively addressed and cleared and the undesired behavior can be transformed back into a desired behavior.