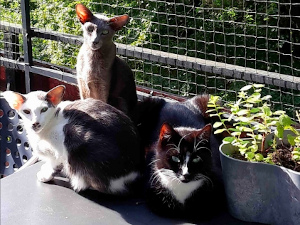 Case Study “My cats can now stay together!”

Challenges when Sandra contacted me

When Sandra contacted me, she was very desperate, and she had already thought about taking one cat out of her cat group of four. For more than one year, the cats experienced lots of stress, and they became more and more aggressive towards each other. Lots of hissing, screaming and spitting, and they also often scratched each other. One of the cats, Charmi, started to pee outside his litter box.

Charmi also had to deal with severe medical challenges, which increased the stress level across the group. Additionally, due to Covid, Sandra started to work from home, and in parallel, the balcony was refurbished and was not accessible for the cats for a few months. Sandra’s and her cats‘ life was stressful and had changed significantly, with severe side effects on the mental and emotional wellbeing of her cats.

Although these stress factors have been no longer in place for a couple of months, the situation in the cat group didn’t change accordingly. The famous four didn’t calm down; sometimes, heavy quarrelings became the new normal daily, and some of the cats often got injured by their feline friends.

Of course, Sandra had already tried all tricks in the book, such as behavioral training, clicker training, cat integration training, pheromones, cannabis oil, to name a few. None of these approaches led to a sustainable, positive change.

„It can’t go on like this. We are all whacked.“ Sandra, a structured and goal-oriented woman, had a clear goal: If there is no significant improvement until September, she had to take one cat out of the group and find a new home.

Solution over two months for Sandra and her four cats together

After the first conversation with Sandra, I suggested working with Sandra and all her four cats simultaneously. All five were heavily involved in the situation and traumatized due to the ongoing stress levels. So, all five had to become a part of the solution. Sandra said, „I can‘t deny that I am also traumatized. I have the feeling that all our buttons are pushed at the same time.“

Step #1: Cat conversation and auric clearing for Sandra and her cats

First, I connected with all four cats to tune into them and prepare them regarding our next steps. I explained what we would do next, clearing their energy field and de-installing all „buttons“ they were pushing on each other all day long.

It became evident that all four cats had very different personalities, every single one with a unique story. Nemo came from an animal shelter, a deep and wise soul who preferred not to get too much involved with the others. Wutz, a friendly but determined cat lady who likes to be bossy and control others. Motte, a sensitive, young cat lady, was often fearful, especially regarding Wutz. And then, Charmi, who suffered the most over the last one and a half years. A fracture of his jaw remained undetected (Sandra’s intuition was accurate, but she was not taken seriously by the vets for a while). Also, he often threw up his meals, and his sensitive, deep soul turned into a martyr personality.

Then, all the five experienced an auric clearing. Sandra stated one week later: „The Situation is relatively relaxed. Wutz reduced her controlling activities, Motte is still in fear of her, but it’s getting better. Charmi changed the most, no peeing outside his litter box for almost a week (!) However, he was throwing up his food a few times. Nemo remains the same. He and Wutz started playing together this week two times. It’s something they didn’t do for a long time. I have the feeling that I’m also more relaxed. I tried not to interfere too much and focus a bit more on myself.“

Step #2: Trauma clearing for Sandra and her cats:

The following two sessions were all about clearing past traumas for Sandra and her four cats. Trauma clearing always requires several sessions because the processes run deep. I worked on birth and childhood traumas and the specific adult life traumas of the last almost two years. These sessions need time for integration. Especially Charmi had a lot to integrate. He used to sleep a lot the day after each trauma clearing.

Step #3: Karma Clearing for Sandra and her cats:

Additionally, I cleared the inherited karmic imprints. That’s what they inherited from their genetic parents at conception and fetal integration. It means that all the „unfinished business“ of our genetic parents at the time of conception and fetal integration goes directly into our DNA. That’s what I cleared for Sandra and her four cats. And I also cleared the unjustified negative karma of this life for all five.

Transformation–“My cats can now stay together!”

After the six-week program, the situation within the cat group and for Sandra and her cats calmed down. It was essential to work with all of them together. They all got into this situation together, and they all impacted each other day after day.

For Sandra, the process of de-installing energetic buttons on all levels of her awareness was a way to allow more balance between her mind and her intuition. „It’s fascinating that I am a lot more equanimous and at peace in situations that stressed me out previously.“

Charmi went through a remarkable transformation. I could clear lots of past traumas for him. His behavior changed for the better, he started playing again, and his body language signaled more relaxation and happiness, joy and trust. Also, his peeing outside his litter box decreased significantly.

The relationships between Charmi and Motte and between Charmi and Nemo improved, „almost as it has been before.“ Overall, Charmi, Motte, and Nemo live much better together and are more relaxed. And that’s a great success. Wutz evolved very well; she got excited, ran through the house, and wanted to enjoy her life. Her attitude to control others might be a challenge at times, especially for Motte and Charmi. Nemo went through the clearing process in his usual silent and inner way. And for Motte, a very sensitive cat, a lot was cleared that will transform into a more centered outer behavior over time.

Thanks so much, Charmi, Motte, Wutz, and Nemo; you all touched my soul, and thanks so much for your trust, Sandra

This case study shows how important it is to work with cats and their humans together to achieve better results. It also shows that customization and the right sequence of events are key to success. My programs as such are based on standardized modules. However, HOW they are applied and in which sequence makes all the difference.